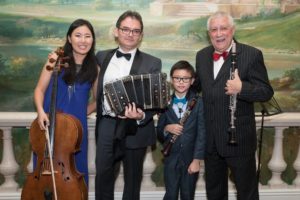 Born in Seoul, Korea but grew up in New Zealand, Jisoo began cello studies at age eleven to escape from studying violin. Her early teachers included James Tennant and Natalia Pavlutskaya. She has participated in numerous Master Classes with Janos Starker, Bernard Greenhouse, Paul Katz, Laurence Lesser and Anner Bylsma. She received her Bachelor’s and Master’s degrees from The Juilliard School as a recipient of the Irene Diamond Graduate Fellowship and the Heward Memorial Scholarship, studying with Bonnie Hampton and Fred Sherry and she studied chamber music with Itzhak Perlman and Robert Mann.

Jisoo is the co-founder and executive director of the Stowe Tango Music Festival, the premier tango music festival in the United States, noted both for its unique series of performances and its high level of tango music training.

Jisoo has been teaching for more than 15 years. Her cello students have won numerous competitions and have been accepted to New England Conservatory, Manhattan School of Music, The Juilliard School Pre-College, MSM Pre-College, Indiana University, All-National Honors Orchestra and All-State Orchestra.

She teaches at the Suzuki Virtuoso Academy in Mineola, NY and privately in Long Island and NYC.

She studied orchestration at The Juilliard School with Jude Vaclavik and Daniel Ott.